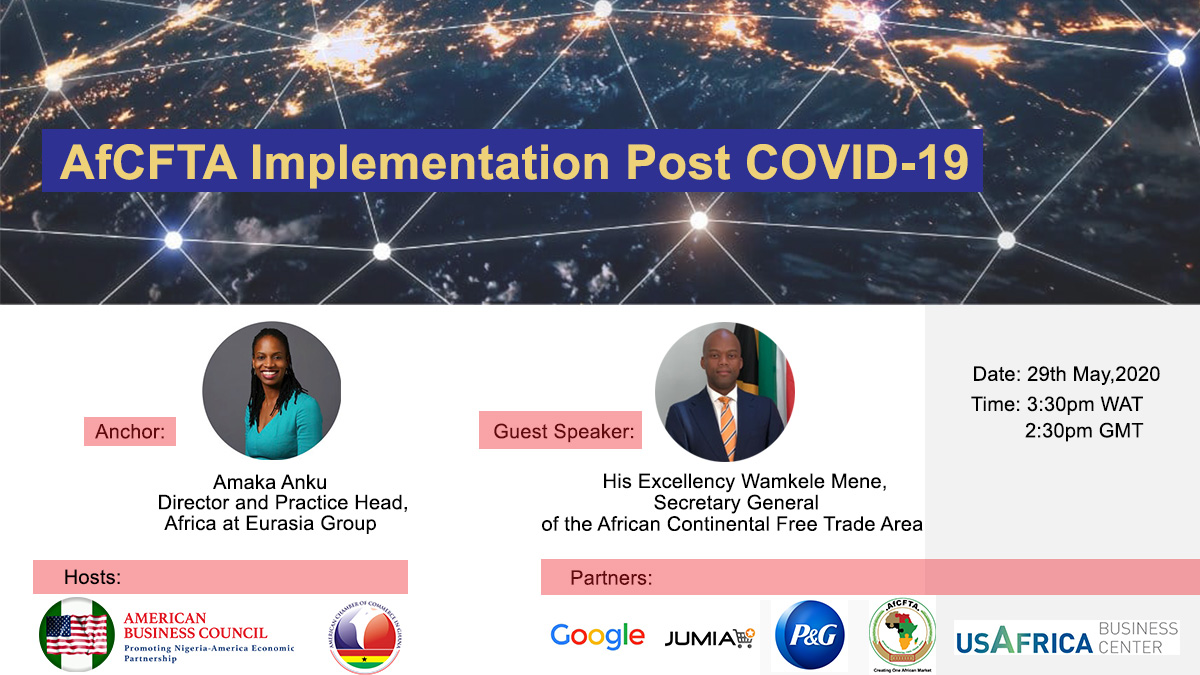 The American Business Council, in partnership with the US Africa Business Centre, American Chamber of Commerce Ghana, Africa Continental Free Trade Area, organized a webinar to discuss the role of the AfCFTA in stimulating domestic production in the wake of Covid-19 and ways in which the AfCFTA can engage partners domestically and internationally to provide technical and financial support to countries in resolving critical issues.
The impacts of the new coronavirus on the global economy has been dire with countries and businesses experiencing economic shocks, healthcare shortfalls, and slowdown in supply chains. Covid-19 has infected over 5 million people and recorded over 356,000 deaths. South Africa, Egypt, Morocco, and Algeria currently have the highest cases in Africa with over 50,000 infected people in each of these countries. Mckinsey estimates that the GDP of Africa could contract by as much as eight (8) percentage points from the 3.9% growth forecast that was predicted for 2020.
At the webinar, the AfCFTA Secretary General Wamkele Mene, stated that most developed Countries introduced economic relief packages to reinject dynamism and growth in their economies for example, the United States and the European Union. African nations do not have either the monetary policy space or the fiscal policy to provide such substantial economic relief packages. For Africa, implementation of the AfCFTA is its economic relief package. By estimates of the World Bank, Africa’s economy will contract between 2-5% but if there is a boost around intra trade and investment Africa could experience some growth.
Whilst the AfCFTA brings some positives, there are some critical concerns by the public and private institutions for instance, a major potential challenge in harmonizing Africa’s heterogeneous economies under one agreement is the wide variation that exists in their levels of development. Over 50% of Africa’s cumulative GDP is contributed by Egypt, Nigeria and South Africa, while Africa’s six sovereign island nations collectively contribute just 1%.
“The American Business Council sees the importance of having this engagement with the African Continental Free Trade Area led by His Excellency Wamkele Mene, to address the concerns of the private and public sector across Africa, determine the timelines for implementation as well as determine critical areas the AfCFTA would require support in achieving its goals” said Dipo Faulkner, the President of the American Business Council.
“Procter and Gamble wholehearted advocates for the strengthening of intra Africa trade and is a firm believer that SMEs are the bedrock of any economy. As such it is imperative to enable interventions that support their competitiveness and strengthen industrialization in Nigeria and among African nations. A quick and effective implementation of the AFCFTA will boost trade in the region, support the competitiveness and integration of SMEs into regional value chains and improve industrialization at the macro level. This needs to take into cognizance, a review of policies that support industrialization in the context of covid19, support for improved supply chain infrastructure and disproportionate support for  the local production of essential hygiene, food and medical items” said Temitope Iluyemi, Director, Global Government Relations for Africa at P&G.
The event was sponsored by Procter and Gamble, Jumia and Google.
To watch the webinar, kindly click here.